Whoa, Nelly!  Things are starting to wind down this term (what?! when did that happen?!), and I’m starting to feel the pinch.  Our final lab practical is next Thursday–it will cover all the bones and muscles we’ve learned in the last three weeks.  One more week of lecture, covering the spinal cord and cranial nerves, and then lecture final is Tuesday the 20th. On the 23rd, I head to CA for a few days with a dear friend expecting her first baby in early April.

And although I should probably be studying for finals on my non-class day, I’m opting instead to attend a workshop on infant adoption for nursing students.  Although I’m not a nursing student yet, I have friends in a local nursing program who are involved in their school’s Reproductive Justice/Nursing Students for Choice chapter.  They’re putting on this workshop, along with some staff from the local Boys and Girls Aid, and I’m super interested in how this will be presented….and to get a sense of how nursing students are prepared to support women who may be planning to place for adoption. More next week.

Other random bits that have crossed my mind in between cramming more muscles into my already full brain: 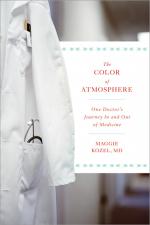 Welcome to Notes from a Student Midwife! I'm a certified nurse-midwife and passionate about reproductive health and justice. This blog chronicles my journey from doula to midwife.